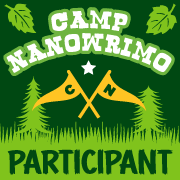 The July edition of Camp NaNoWriMo was complete and utter chaos for me.

I barely broke 16,000 words.  Of course, that is 16,000 more words than I had before, and I do have a nice backlog of posts for this blog (I’m spreading them out, though, and writing some new ones in between them all, so that I get in the habit of it!), but July and August are now beginning to look like they were/will be more chaotic for me than November ever is.

When it comes to November, I know what I’m doing.  I tell my family that I’m writing, and can we please do the church board meeting the last Sunday in October instead of the 2nd Sunday in November?  And to please let me know by the beginning of November what part of Thanksgiving dinner I am going to be responsible for, so I can plan ahead?  I also *cough* make 60+ breakfast burritos and put them in the freezer so that hubby and I can have a good breakfast every morning and I don’t have to actually cook breakfast in the month of November.

All the Camp NaNo stuff got finalized pretty late in the game.  We MLs were being fed what information there was behind the scenes, but even then nobody was able to get into the Camp NaNo site until the day of.  Between my job, my husband getting his new job, and church responsibilities, etc, writing time was hard to come by.

Will I do better for August?  Absolutely.  I have short stories I have to write for the conference contests, those are due August 27th.  I want to enter the Writers of the Future contest this year, and that’s due Oct 1st.  Somewhere in there I have to plan for NaNoWriMo this year – both my personal writing, and finish planning events for this year since I am a Municipal Liaison. (Shout-out to TheBarenakedCritic, my co-ML!  She’s awesome!)

Will I hit 50k in August?  I have no idea.  I know I will in November.  August is a completely different story.

Of course, in-between all of this other stuff, my part of the world hasn’t had more than a sprinkling of rain in the last month.  We’re now on voluntary water restrictions, and that might become mandatory soon.  School is getting ready to start again for all the youngsters.  Have I mentioned it’s been so hot that people are baking cookies on their car dashboards?

The only thing keeping me going for August Camp NaNo is the fact that we’re having a write-in this month.  Possibly with s’mores.  I really want to set up my camping tent, but we’re meeting at the library and I don’t know if they’ll allow that.

Are you doing Camp NaNo for August?  What’s your project?