Sacrifice is one of the most used themes in fantasy writing.  Most fantasy novels I’ve read, and much of what I’ve written, play with the theme of sacrifice.

Just think – Aslan dying in Edmund’s stead in the Lion, the Witch, and the Wardrobe.

Gandalf sacrificing himself in the fight with the balrog so that the fellowship can escape. 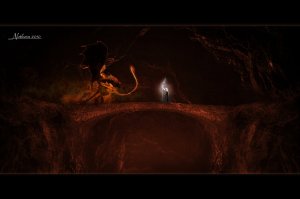 "You Shall Not Pass" by Nothorn on Deviant Art

One of my favorites, from the Firebird series by Kathy Tyers – Brennan being willing to sacrifice all of himself – even the very essence of who he is – to save his people.

Sacrifice is something that resonates with mankind as far back as we can remember.  It’s a repeating theme in history, in literature, and in life.  It’s one of those things that we don’t always understand, but it’s ingrained so deeply within us that we must explore it as much as we can.  Not all sacrifice is good (such as depriving yourself of something that you NEED to live), but it can be one of the most powerful ways to influence a life.

It’s a theme that’s playing very strongly into my current WIP, the Undoing Chronicles.  The story begins with a sacrifice, when Sachi realizes that her death is what will set the whole Undoing into motion.

How has the theme of sacrifice made its way into your life, or into your writing?

6 thoughts on “S for Sacrifice – #atozchallenge”