Hey everyone! Welcome to another Debut Author Challenge book review!

As per usual: I received a copy of this book for free from the publisher through the DAC ARC Tour in exchange for a review of this book.

I have a confession to make.

I love dragons.  Always have, always will.  And dinosaurs, but haven’t you ever wondered where the dragon legends came from in the first place? 😉

So when I had the opportunity to read Seraphina, I went for it!

It went above and beyond my expectations.  And I’m a picky fantasy reader, fyi. 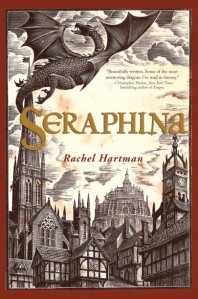 Four decades of peace have done little to ease the mistrust between humans and dragons in the kingdom of Goredd. Folding themselves into human shape, dragons attend court as ambassadors, and lend their rational, mathematical minds to universities as scholars and teachers. As the treaty’s anniversary draws near, however, tensions are high.

Seraphina Dombegh has reason to fear both sides. An unusually gifted musician, she joins the court just as a member of the royal family is murdered—in suspiciously draconian fashion. Seraphina is drawn into the investigation, partnering with the captain of the Queen’s Guard, the dangerously perceptive Prince Lucian Kiggs. While they begin to uncover hints of a sinister plot to destroy the peace, Seraphina struggles to protect her own secret, the secret behind her musical gift, one so terrible that its discovery could mean her very life.

In her exquisitely written fantasy debut, Rachel Hartman creates a rich, complex, and utterly original world. Seraphina’s tortuous journey to self-acceptance is one readers will remember long after they’ve turned the final page.

Let me just say this: I will be buying this book as soon as there’s money in the budget for it.

I’ve read my fair share of dragon books – Mercedes Lackey’s Dragon Jousters series (which I adore!), Shana Abe’s Drakon novels (not for children – these are technically romance novels, but the scenes are few and far between), and whatever else I can find!  The Hobbit counts as a dragon book . .  right?

Seraphina has bumped its way to the top of my list.

Everything about this book captivated me – the world building, the characters, the plot . . .

This is the type of story I’m hoping to find every single time I pick up a book.

Seraphina is talented, and she knows it, but she’s still down-to-earth.  She happens to be half-dragon, as well, and that’s her deadly secret.

The culture and history between the dragons and the humans are so rich and intricate, and even through all the 430-some-odd pages that actually make up the story, I was never bored.

The book moves a tad slow at the very beginning, but everything relates to the main plot of the book – even the things that don’t seem to at first.  It takes talent to weave in every loose end, and that is exactly what Rachel Hartman has.

It has a slightly cliffhanger ending, and the romance that is subtly woven into the story line is only confirmed at the very end, but it’s heart-warming and yet has just the right amount of angst with a love-triangle that is sure to be an interesting twist in the next book. (There had better be a next book!)

If you love rich, intricate, interesting fantasy, you will enjoy Seraphina.  It earned my hard-to-come-by 5-star rating on Goodreads, so check it out!

← Where did July go? #writemotivation and #writemehealthy updates.
Stars for the Dead – Camp NaNo 2012 Aug 1 recap →